Personal Blog: A Reflection on Lakesmere

It is never good news when a company the size of Lakesmere fails. You can almost guarantee that the management would have been frantically trying to finish their contracts or at least get them to where they should be to assist with the cash flow of the business. Of course that is the logical thing to do! However, when all of the subcontractors and suppliers are asked for more labour and more materials, then this should , in normal circumstances be good news.

The subbies and suppliers turn-over increases along with the profits on paper, but then when the failure is announced, it is the Small businesses that really suffer. These businesses were doing all that they could to help what they percieved as a solid client that they classed as crucial to their business only to be left high and dry. We can pretty much be certain that the directors of Lakesmere won’t lose their houses and status as such, because they have vessels like McMullens (same Group) to carry on with. A bit of pride may have been hurt, but that’s about it I reckon. 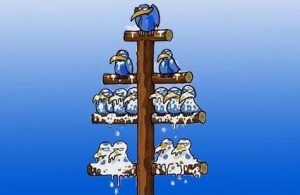 What about the SME’s (Small/Medium Enterprises)? Creditors will be chasing  their money, HMRC will be expect their payments on time, wages will need to be paid and so on. How do you think you can get out of the situation that you have been thrust into through no fault of your own? You try to trade out of it! Ok, seems sensible, however, you need materials for the new work. Now the problem is that your suppliers wont supply you because you owe them money, maybe sometimes backed with a personal guarantee. Then you need your labour, but they won’t work as they are owed wages, and one by one the cards start to fall in.

Cash flow is very tricky at the best of times, but when you take a hit, you are seriously standing on a two legged stool with a noose around your neck. Its not unheard of  for many directors to lose their homes, their families and in very bad cases even take their own lives.

As a director, almost everyone you knew and trusted start to change into something else, and you realise that what you thought were good working relationships, were in fact purely based on the fact that you were a meal ticket. In extreme cases, you will get someone that you have trained fully in the business, start up against you, take your clients and your staff and leave a sinking ship. You would be a very lucky person to have someone stand by you when they are owed wages.

This scenario will start to happen to many companies that Lakesmere relied upon, and there will be no mercy for these companies at all.

We thought that Lakesmere was a good company to get in with so we put our selves forward and started working with them. All was very good until about three months into a job, we had a rogue salesman, who decided to jump ship to a rival company. The contacts in Lakesmere were through him which meant he had all the names that make the decisions. I took my kids away for a week, and by the time I had come back, many of our labour force had been convinced to jump ship by this rogue salesman, and Lakesmere asked us to leave site.

When I went to site to discuss the matter, they stated that the work was sub standard, The site manager actually stated that he was happy with us and didn’t want anyone else on site, and that the decision was made from head office. The funny thing was all of the employees that I had on that site were still on there with different tee shirts on!!!

I can honestly say that you would swear that I had just killed someone by the way I was treated.  Consequently, two more Lakesmere/McMullen sites we were thrown off, and this rival company replacing us. What we then saw was a number of the ex employees whom we had let go because of sub standard work, were all in this companies branded tee shirts and on site, and trust me, these men were problematic to say the least, yet we were asked to leave site!!!!

So do I have sympathy with the inflated egotistical managers that treated their Sub-Contractors so badly (not all were like this I must say)? Certainly not, and they are probably a contributing reason why the company failed (just a wild guess), do I feel sorry for all of the companies that will now struggle through the toughest time of the year with no recompense whatsoever? Of course I do, the system is all wrong, companies who have been running perfectly well until they take a hit from such a large company should be fully supported to ensure that they not only survive, but prosper. This would safeguard jobs as well as the economy. When a large company is in trouble, we should all be made aware before deciding to take on the work.

Just another reason why our industry is decaying and has no morality – it’s purely dog eat dog, and the attitude is “If you can’t take the heat, get out of the kitchen”!! After all, how dare you be ambitious, how dare you create jobs, and because of your cheek, we will put you in debt, ruin your home comforts and leave you distressed!!!

As a company Director your existence is so fragile, as banks wont help with cash anymore (unless you give Personal Guarantees), you struggle to get credit from suppliers, HMRC is closing every access to benefits that once existed, you are told what to pay people, you now need to contribute to pensions, you need to train your staff (which I am not against, so long as its relevant) in the most ridiculous of tasks.

If a large established company like Lakesmere can fail, remember how fragile we all are at these turbulent times.

A Sincere Good luck to all those affected.

Gapple is a part of a support system to the curtain wall/ window fixing and cladding and steel manufacturing companies.

We Offer Full Project Management Service Across The UK With An Experienced, Accredited Workforce. Read more about our services...

With A Proven Track Record As Building Refurbishment Contractors, We Offer An Enhanced Management Solution